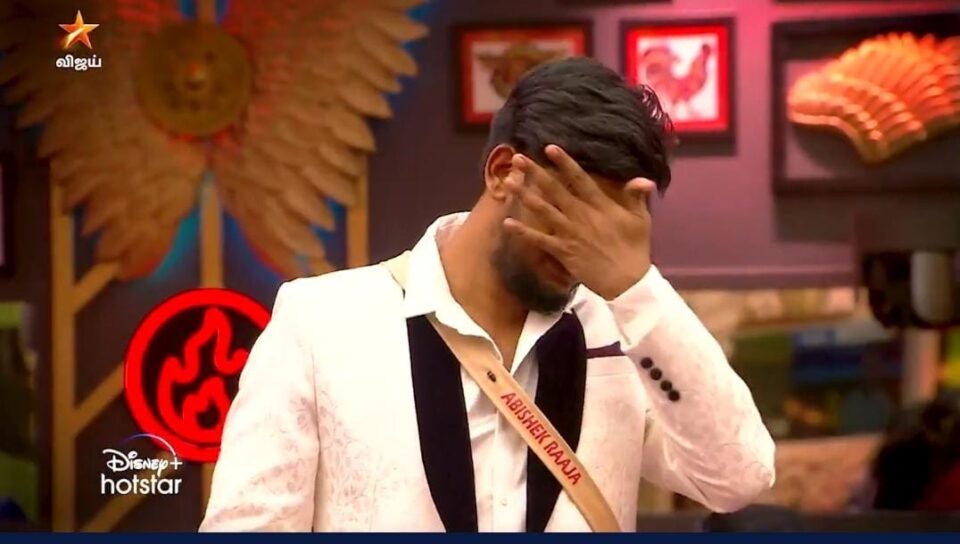 Day 7 of the Bigg Boss 5 Tamil begins with Mr Kamal Hassan giving a pep talk and then says that there is no nomination this week.

Contestants were asked to talk about each team. At first, cooking team.

Everyone appreciates the team. All the contestants says that the team took care of them very well, right from having food all the time and serving it well.

Chinnaponnu, who is a member of cooking team, says that she is very glad to make food for the contestants as they are like her kids.

Priyanka says that it is a new experience as she is used to be on the other side of the kitchen. Ciby says he learnt to make tea and also, learnt how curd is made. There is a huge laugh for that.

Then Mr Kamal asks about cleaning team and once again, everybody appreciates the team for their work and explains how everyone does the work.

-Pavni wakes up early, takes bath, gets ready and goes to sweep right away
-Abhinay thinks well and works accordingly.
-Abhishek says that Nadia talks more to the dust and trash in the house rather than human, says she is very dedicated.

In the Vessel washing team, it looks like Niroop is always around there because he helps out the kitchen team as well. For example, he breaks coconut, takes rava box from the top.

The contestants also appreciates restroom team, especially, talks about Thamarai Selvi. She is the only one who cleans the women’s restroom. Thus, she gets more acknowledgement.

Mr Kamal says that he is surprised to see everyone appreciating each other and asks them to wait until nomination and things would be different then.

After a break, Mr Kamal asks Abhishek to talk about his opinion on other contestants.

He says
-Isai Vani is self-made and her only aim is to make people happy. He began to love lyrics instead of music because of her
-Pavni is like rose, with thorns being her path so far.
-Iyakki Berry is like Barbie doll, anyone can love the doll and it can be a cure for your loneliness but that doll also has emotions
-Once he had seen Raju narrate a story and he loved that story and the way he narrated with details.
-loves Akshara Reddy’s nose and she looks like actor Vinothini.
-Imman Annachi is like jack fruit(pala pazham). He might look hard from outside but just like the fruit, one can do anything with that.

While talking about Priyanka, Abhishek begins to cry. He explains that he was very close to his sister but when she got married, he began to miss her. Now, Priyanka is fulfilling that role. He continues to cry while talking about Chinnaponnu. He says that due to his work, he couldn’t spend much time with his mother in last few years. Now, he is happy to be with Chinnaponnu. Both Priyanka and Chinnaponnu hugs him.

Priyanka says that she didn’t like Abhishek initially because of his videos and contents. She adds that once she came to know about him, he is totally a different person and is like a child.

Mr Kamal asks others if they agree with Abhishek’s opinion, Imman Annachi says that it is almost the same.

Mr Kamal asks Niroop and Raju to get things from store room.

There is a board with photos of all contestants and everyone is asked to give either like or dislike to any of two contestants.

Raju gives like to Imman Annachi, says that he spends most of the time with him. He gives dislike to Niroop, saying that he is like a child in a giant body but at times, that doesn’t go well with him. He asks sorry for the same as well.

Chinnaponnu gives like to Priyanka, saying that she inspires her and she knows her well because of shows. She gives dislike to Imman Annachi saying that he seems different from how he was on day one.

Priyanka gives like to Niroop because of the vibe they share. She gives dislike to Nadia saying that she wants Nadia to come out and mingle more.

Isaivani gives like to Abhishek because she was able to bond with him and he has taken care of her when she was down. She gives dislike to Akshara Reddy, saying that she couldn’t bond with her despite trying many times.

Niroop gives like to Priyanka for the same reason Priyanka had said. He gives dislike to Nadia because the latter had given dislikes to many during the Luxury budget task round and she wasn’t able to give any reason for that. He adds that he doesn’t have any problem with her personally.

Madhumitha gives like to Nadia saying that the latter was there for her whenever she felt insecure in the house and had motivated her. She gives dislike to Thamarai Selvi because she had to give it to someone. She adds that Thamarai Selvi had spoken about skin color which made her a bit uncomfortable other than that, she loves her and everyone else in the house.

Akshara Reddy gives like to Niroop saying that it should go to five other contestants as well with whom she shares a good bonding. She adds that she wants to give dislike to Isaivani and Nadia as she couldn’t bond with them yet and right from the start, she thought they need some space. Thus, she didn’t disturb them.

Nadia gives like to Madhumitha, says that she resembles her second daughter and has the same eyes as her husband. She gives dislike to Akshara. She adds that the latter looks like she has some attitude.

Abhinay gives like to Priyanka as he gets that sister feel from her. He adds that ten years ago, he was a different man. Someone who was way too innocent and he sees the same in Ciby now and thus, he gives dislike to him.

Ciby gives like to Abhinay as he is like a college senior and he wants to learn a lot from him. He gives dislike to Imman Annachi as he couldn’t understand a few things that the latter speaks.

Iyakki Berry gives like to Madhumitha because she loves her just for the way she is and dislike to Priyanka just because everyone has given her likes.

Suruthi gives like to Raju as he is like a brother from another mother. She gives dislike to Akshara as she couldn’t mingle with her. Since they both entered the house at the same time, she thought tha she would bond with Akshara the most but that didn’t happen.

Abhishek gives like to Pavni because he adores her and wants to be like her. He gives dislike to Thamarai Selvi says that he is yet to get that rapport with her and is trying so hard for that.

Imman Annachi gives like to Iyakki Berry as she is the only one who is always active even today while others have become tired in a week inside the house. He jovially gives dislike to Priyanka as she never allows anyone to sleep and is always funny.

Pavni gives like to Imman Annachi as she spends most of her morning with him and he is very motivational. She gives dislike to Abhinay as he always makes fun of her. Though he is her go-to person, she wants to give dislike because of the game.

Varun gives like to Raju saying that he resembles his cousin. Thus, right from the first moment he entered the house, he wanted to bond with him and he dislike to Thamarai Selvi. He says that he loves her and her innocence but at times, her innocence is overwhelming and that makes him to doubt her.

Thamarai Selvi gives like to Imman Annachi saying he was always there for her and dislike to Akshara as the latter didn’t talk well to her in the last few days.

Isaivani, Varun, Chinnaponnu and Pavni are the four contestants who neither got like nor dislike. Mr Kamal says that he would prefer to have any one of those as that would help them to grow.

During the break, we see all the contestants talk. Akshara asks sorry to Nadia for giving dislike and explains her character. She says that she might look like someone with attitude but she is just an introvert. Akshara begins to cry and Chinnaponnu tries to console her. Isaivani and Suruthi tries to explain to Akshara but the latter says that it looks fake at the moment and she doesn’t feel for the dislike but she feels like they had misinterpreted her.

Iyakki Berry hugs Priyanka for dislike and the latter says it’s okay. The same goes with Abhinay and Ciby.

After the break, Mr Kamal asks Imman Annachi to explain how he feels about all the contestants. He adds that if Imman Annachi is the comedian in the house, who could be the hero and antagonist here.

Imman Annachi says if this is a cinema, Abhishek is the most knowledgeable person here and he is like the manager. Raju is the hero of the house. Thamarai Selvi is the most innocent one and is like his sister.

He adds that Madhumitha, Suruthi, Pavni, Iyakki Berry are like his daughters. He syncs well with Priyanka because they share same profession. He doubts whether Niroop sleeps or not.

Talking about Ciby, he says that he is yet to know about him and he will understand him in coming days. He is yet to mingle well with Isaivani, who prefers to be alone most of the times and keeps singing.

Talking about Chinnaponnu, he says that she is the pride of Tamil Nadu and she might have misunderstood him when he had told her to sing a song while Abhishek was crying. The latter had shed tears while talking about his mother. Chinnaponnu asks leave that.

Mr Kamal says that Imman Annachi has given positive remarks for everyone and it will be changing when the nomination begins. With that, he signs off.

We then get to see Priyanka advicing Thamarai Selvi and explains why many would’ve thought that she might be faking her innocence. The show ends with Akshara sitting alone in the outside area and she is seen crying.