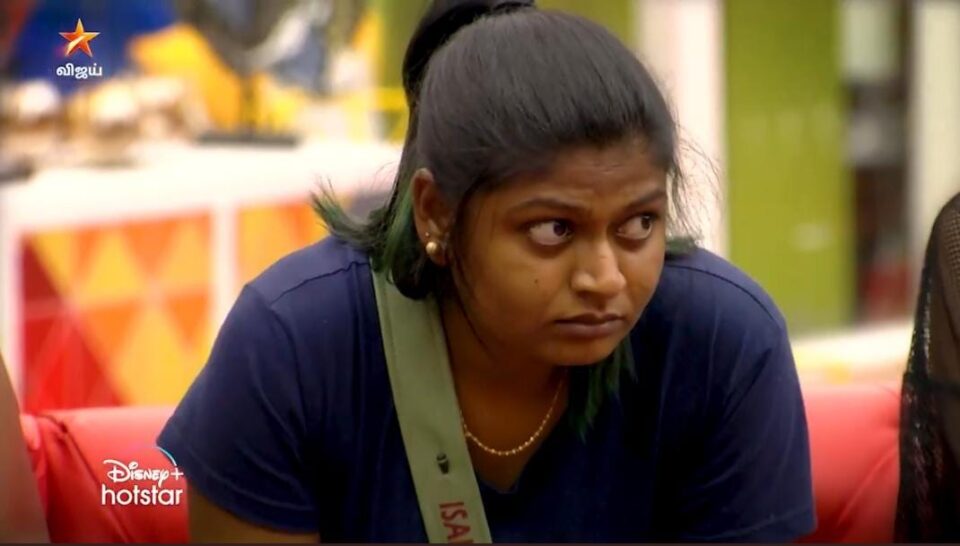 Day 8 of Bigg Boss 5 Tamil begins with “Vali Maame Valippu” song. We then get to see Imman Annachi talking to Thamarai Selvi. He advices her not to change and to be true to herself that is important. He asks to throw away others’ opinion. She says that she had understood a lot about herself from Priyanka’s advice last night.

The selection for this week’s leader begin with an interesting task.

A big balloon is tied to each contestant. There are two needles placed in the outdoor. When the bell rings, the contestants have to rush to pick up the needle. Whoever has the needle can burst the balloon of other contestants.  The bell will go again and the contestants should keep the needle in its place and wait until the bell goes again. The last contestant standing is the leader for the week.

Everyone fights hard but Niroop dominates the whole game. Abhishek plans for different strategy while Chinnaponnu and Thamarai Selvi doesn’t leave the kitchen. Abhinay begins well but somehow his balloon gets burst.

Later, Abhinay picks up the needle and tries to end Niroop’s game. He says that he is a very strong contestant and he doesn’t want him to be the leader for the week. The contestants fight regarding the rule of the game as Abhinay got eliminated already. Abhinay says that he is just using the game’s loophole but it looks like he was wrong.

He even has a rift with Imman Annachi. Varun and Ciby are also involved in this. As Varun increases his voice to make a point, Imman Annachi gets upset and asks him to lower his voice. After the rule was cleared, all the three moves in.

In the end, Niroop, Chinnaponnu and Thamarai Selvi are left. Niroop couldn’t get past them both as Thamarai Selvi bursts his balloon. All the contestants hugs him for his game.

Thamarai Selvi says that it is Drama art versus Folk now and it is a stage to decide which one is stronger. Chinnaponnu doesn’t like what Thamarai says and she bursts her own balloon, says that it is an accident.

Later, in the bedroom, she says to Priyanka that Thamarai had hurt her and that’s why she had to burst the balloon to stop her from talking. Chinnaponnu says the same to Thamarai and the latter asks sorry.

Thamarai gets picked as the leader of the house. The contestants make fun of her and they hear Bigg Boss voice. He asks one by one to enter the confession room for nomination process.

Akshara Reddy nominates Isaivani first. She says that she should’ve come and talked to her first rather than telling it during the Like-Dislike round. She adds that after that game, Isai came and hugged her while Akshara was crying and the latter feels that it was fake. Thamarai Selvi was her second choice but since she cannot choose her, she opts for Suruthi. Akshara believes that Suruthi hates her and because of that she doesn’t get a good vibe from her.

Abhishek nominates Nadia Chang first. He adds that Nadia knows more about the show and thus, he is playing with good calculation. He believes that she has an uncontrollable anger which would spoil the show if it comes out. Also, he feels that she is not a natural entertainer, something this show demands. He then nominates Akshara saying that she couldn’t be a team player and also not in her individual state. She looks a bit confused thus, she is not fit for the show.

Abhinay nominates Isaivani first. He says that the latter is finding it hard to gel with everyone in the house. He is able to move well with her because of the efforts he takes. He then nominates Raju as he believes that Raju is a strong contestant who could give him a tough competition.

Priyanka nominates Akshara first because the latter showed some change in behavior right after the dislikes she got. Iyakki Berry is her second nomination. Priyanka says that Iyakki has a strong personality but she doesn’t show much involvement here.

Chinnaponnu says that she is nominating two contestants who had hurt her in the house. One is Isaivani and the other is Imman Annachi.

Imman Annachi nominates Abhinay and Ciby because of the way they behaved during the game for selecting the leader. He felt that Ciby raised his voice and didn’t respect anyone while he got doubts in Abhinay action. He feels that Abhinay doesn’t want a few to win the game.

Madhumitha nominates Isaivani because the latter didn’t respond well when she tried to talk to her. Her second nomination is Niroop as she feels that he is a very strong contestant.

Suruthi nominates Akshara first for the same reason she said yesterday, she couldn’t gel with her. Niroop is a strong contestant thus, she nominates him.

Niroop nominates Varun and Abhinay for the way they had behaved during the game.

Raju nominates Abhinay for the way he behaved with Imman Annachi during the game. He then nominates Priyanka as she is a strong contestant.

Nadia nominates Niroop as he is a strong contestant and also nominates Imman Annachi as she thinks that his jokes might hurt a few in the house.

Pavni nominates Ciby and Niroop for not being able to talk, connect or start a conversation.

Thamarai Selvi nominates Chinnaponnu first saying that she is not affectionate to her as she is with other contestants. Her second nomination is Madhumitha. The latter had hurt her during a conversation.

On the whole, the below contestants are nominated.

Pavni is the only contestant who didn’t get an nomination.

Thamarai Selvi, as a leader, reminds the rules once again and picks team for each task.

Madhumitha and Isaivani were seen talking outside. Madhumitha says that she had tried talking to Isai many times but she didn’t respond well. Isai says that she just wanted to give her space and feels that everyone in the house hates her. Madhumitha corrects her by saying that it is her perspective and she likes her the most in the house.

A few contestants were seen discussing the game and says that they didn’t know that there were strategy and it was surprising to see how everyone had changed within a week and had played the game today. With that the episode ends. 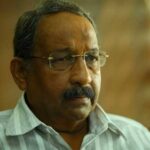 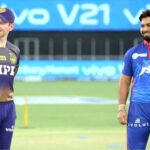