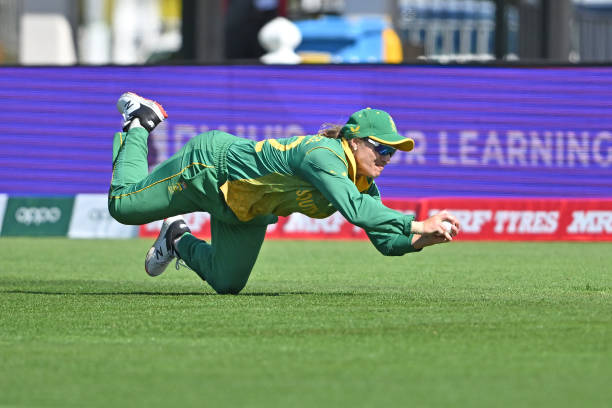 How often do we see contenders for ‘Catch of the tournament’ in a match? Now, imagine having two of them in one, with Mignon in the middle.

**
Ash Gardner wasn’t finding her right length in the last few deliveries. She was bowling either flatter or fuller. This time, when the ball met the pitch, it returned with some awkward bounce. The bounce made Mignon du Preez go for a slog, a boundary over deep midwicket. The skipper wasn’t happy. She, of course, wasn’t happy. Mignon, on the other hand, had a wry smile. She might not be getting enough runs as she would’ve wanted but is just too good to leave a delivery like that.

The figures don’t really tell you the whole story. Gardner was good with the ball, well, most of the time but it was one such day where runs were overflowing, and the wickets column was rarely disturbed.

***
Jonassen has the ball. Kapp and du Preez enters a serious discussion. Kapp was doing the talking. Jonassen adjusts the field, and Gardner finds herself at the deep midwicket.

Jonassen knew it was coming. Everyone knew. The script went as per the plan. Du Preez muscles one through the deep wicket. The ball was supposed to travel over Gardner. At least those who were in the field, everyone, including the cameraperson, thought so. Enter Air Gardner.

She was very much inside and was stated in such a way to prevent twos. As the ball came over her, she backtracked. Can she go all-in? Yes, she did. She timed the jump to perfection and threw one hand in the air. The ball stuck. The catch was taken. Gardner amazed herself. She was smiling.

If it was some other player, they would’ve shown different emotions but it is du Preez, the South African ambassador of hugs. All she did was smile as she walked back.

Mignon du Preez has done it before. She has taken screamers. Flew flat. Dived horizontally. Plucked one-handed catches. You name it, she has it. She is a superhero without the cape in the middle.

The worst part is, she does it with a smile. If you are a batter and when she plucks one, it puts you in a spot where you cannot stay angry but applaud. It is a mixture of the epitome of elegance and irritation in one package. How do you even explain that emotion?

Mignon du Preez makes you feel all these. It is certainly not a good place to be in.

Haynes did break a few records and create some in this World Cup. She was a batter in form. As expected, she began well with a boundary off Ismail in the first over, but the world’s best pace attack knew how to pull things back. Haynes played ten dot deliveries in a row, and she had to do something to keep the ever-increasing run-rate in check.

A couple of boundaries in Ismail’s over eased up the pressure, and the pressure pendulum moved towards Luus. She threw the ball to Tryon.

Tryon went from good to worse in the first three deliveries but at times, it’s those bad deliveries that get you the gift. This time, it was literally gifted by some Mignon magic.

Tryon bowled a half-tracker to Haynes. She pulls it. The power was there. The placement was there, well, almost. Lesser did Haynes knew du Preez could fly. Fly with the glasses on.

Deep Mid wicket it was. Once again. du Preez was waiting for the right moment. As the ball came closer, there were zero doubts and she went for a two-handed catch.

I repeat She was flying. With glasses on.

Once the catch was out, the smile was all-in, and there began those long hugs that could heal anything in this world.

Mignon is magic, and the world could use some of it.

Hey, we don’t make the rules. 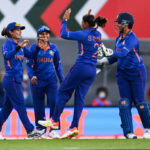 Being Rajeshwari in Rana’s world