Boney Kapoor also added that the shooting of the movie would begin by December 13th and will be a Diwali 2020 release.

He also added that Ajith will be donning the role of a cop.

The movie is directed by H Vinoth and Yuvan Shankar Raja will handle the music while Nirav Shah cracks the camera for the movie. The other cast and crew of the movie will be confirmed soon.

Virat Kohli’s rage is his fuel! 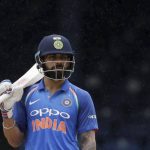 Ajith’s next titled as Valimai