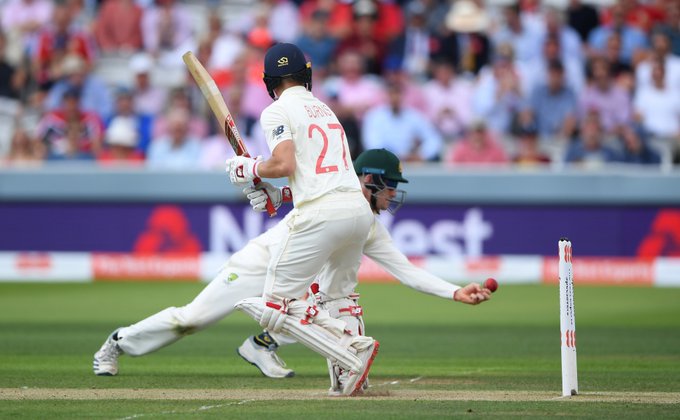 After restricting England for 258 on day two of the second Ashes Test match, Australia was 30-1 by the end of day’s play. Stuart Broad castled David Warner in the fifth over by an in-swinger bowled from wide of the crease. Cameron Bancroft and Usman Khwaja saw through the last few overs without any further damage.

Tim Paine who won the toss, decided to field first to make use of the pitch which was moist and under covers for a major part of the time. Josh Hazlewood was picked ahead of Mitchell Starc and he made full use of the new ball.

Hazlewood removed Jason Roy in his first over as the England opener’s horror run in Test cricket continued. Hazlewood persisted with the fifth stump line outside off stump as Roy poked at one of those early deliveries to Paine. Joe Root walked in at number three and looked positive right from ball one. He hit a couple of boundaries off Pat Cummins to get going.

Hazlewood was the pick of the bowlers, especially in the first session of the day. He bowled beautifully sticking to line and length and forcing the batsman to play at those deliveries. He removed the England captain with a sharp inswinger and struck Root on the pads. Root was on the back foot and the umpire had no hesitations in raising the finger. England was 26-2 by the end of the tenth over.

Peter Siddle had an off day at the office. He was all over the place in his first spell and Rory Burns and Joe Denly made the most of it. They score a flurry of boundaries off Siddle. The duo added 66 runs for the third wicket seeing England through to lunch without losing any further wickets.

Hazlewood had his third as he kept nagging in the corridor of uncertainty testing the batsman’s patience. It was a full delivery with a little bit of away movement. Joe Denly poked at it and Paine completed the formalities.

Rory was lucky as he was dropped a couple of times. It was Siddle on both occasions. The first time he angled it away and full; Rory had a go at the wide delivery and Usman dropped a straightforward chance at gully. The second time was also a seam up delivery angled across the batsman, which Burns nicked only for Paine to drop it.

Burns got to his half-century before getting out to a screamer taken by Bancroft at short leg. It was a short ball from Cummins as Burns tried to fend at it. The ball went straight to backward short-leg and Bancroft made a full-length dive to his left to grab it millimeters off the ground. The ball bounced off his hand as he landed on the ground but somehow Bancroft managed to hold on to it. It was a sensational catch. That video could be a perfect catching manual for those who field at short-leg.

Jos Butler and Ben Stokes were removed in quick succession by Siddle and Nathan Lyon respectively. Siddle got his length right in his third spell and finally, a catch was taken off him. Butler played a good length delivery with a hanging bat and ended up giving a regulation catch to Paine. Stokes was struck in the pads as he tried to paddle sweep Lyon and was given out straight away as the ball was hitting middle and leg stump.

All of a sudden England were in deep trouble at 138-6. Jonny Bairstow and Chris Woakes came to the rescue. They put up a partnership of 72 runs for the seventh wicket. Bairstow used the sweep to counter Lyon while Woakes used his feet to counter the off-spinner. There were moments which could have gone either way. A couple of edges fell short of slips and a top edge went to six.

Chris Woakes was tested with a series of short balls from Cummins. He finally nicked one down the leg side and the ball brushed the gloves on its way to the keeper. Pat Cummins used the short ball well against Archer too. He bowled it short aimed at the body as Jofra tried fending it, a top edge lobed towards gully where Usman ran and completed a good catch.

Meanwhile, Bairstow ended his run drought in the longer format as he completed his half-century. Put him under pressure, he delivers. Another failure might have led to a drop from the next match. However, he managed to rescue the team out of trouble by building a partnership with Woakes and batting with the tail. He was the last wicket to fall trying to score off Nathan Lyon.

England will look to take early wickets on day three. It will be an interesting day as the entire world is looking forward to the contest between Jofra Archer and Steve Smith. Hopefully, if the rain stays away, we are in for an exciting day of Test cricket. 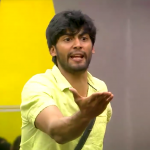 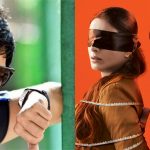