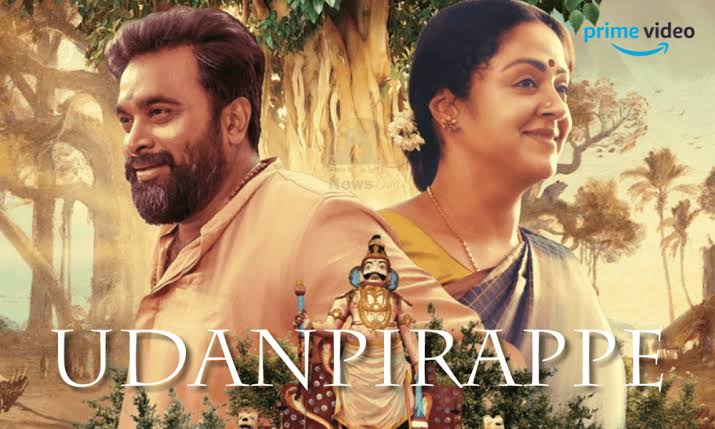 Udanpirappe is a film directed by Era Saravanan with music by D Imman. The drama film is produced by 2D Entertainment. This film marks the 50th film of Jyotika. Samuthirakani, Sasikumar are the two other main characters in the film.

We live in a hero-centric era where we don’t normally celebrate Sheroes as much as we celebrate heroes. Jyotika has been an exception in this along with a very few actors.

In fact, her growth in acting is something we have witnessed very closely. This film is yet another example of how much she has grown as an actor.

As she revealed in the live show on Wednesday, this film is special because this is her first ever festival release and she had to wait all these years to get one.

As the world moved into content-oriented films, we began to see a lot of sheroes dominating the screens and Jyotika’s part in that is huge.

All that being said and done, Udanpirappe could’ve been better as Jyotika deserves more. It probably has a lot to do with the expectation of this film being her 50th one.

This is a script we have been seeing, since Pasamalar times. The plot is almost the same. The brother-sister relationship and how it goes to swing when sister’s husband enters the story.

Here, we see Sasikumar as Jyotika’s brother and Samuthirakani as her husband. Both actors does the literally the same role they usually do in most village
-centric films.

Vairavan (Sasikumar) lives for things that are right but is very hot-headed. He picks up violence as his route to teach the right thing. The villagers are afraid of him too. On the other hand, Sargunam (Samuthirakani) is a school principal who doesn’t like Vairavan’s way and he had faced personal loss for which he blames Vairavan’s influence. He hates Vairavan right from the start.

In between their relationship, we see Mathangi (Jyotika), who wants her brother and her husband to reunite. However, Mathangi doesn’t really do much but simply tags along with her husband hoping for the fate to miraculously do something.

This doesn’t go well with Mathangi’s character who is shown as an independent woman and has her own punch scenes during the start of the film.

In fact, the creators has done well to pay tribute to Jyotika for her 50th film. There is pre-title credit montages showing her various roles along with a personalized logo.

Jyotika (Mathangi) then gets an excellent introduction scene too. A group of villagers who were cleaning the pond looks around for Jyotika inside the pond. They begin to worry as they couldn’t find her anywhere. We then see Jyotika rise from the pond with a deity which went missed.

There are a few other moments too that are nicely written to show Jyotika as THE star, something she deserves.

However, the film could’ve been better considering it is the same story we have been seeing for uncountable years.

As the title indicates, “Udanpirappe” is likely to show the bond between Vairavan and Mathangi but a few scenes doesn’t connect much with us, probably, because of the way the story has been told. We see the present day and their relationship and there is a backstory on how close they used to be. That story could’ve been better with a more scenes that shows the bonding between them. Even the biggest sacrifice Mathangi does for her brother doesn’t really impact us. Yes, there are a few scenes that are emotional and works well.

Also, we have other actors whose character is not explained well. It seems like they all only care about this “siblingship”. It would’ve been nice to know more about those characters too. Soori makes us laugh in a couple of scenes.

On the other hand, Adhiban played by Kaviyasaran doesn’t really has much to offer to the story. Adhiban is a rich person who wants to set up bottled water plant in the village. This story looks like a completely different plot within one and doesn’t impact us once again.

Though the acting is top notch, the scenes are either over melodramatic or simply falls flat. The director’s arrow comes closer to the target but is taken away by the wind and it misses the target.

However, the whole film is saved by the acting of Jyotika, Samuthirakani and Sasikumar. We have seen the other two play these kind of roles for years now but the way Jyotika has acted, it makes us fall in love with the actor once again. In recent times, she has done some powerful roles and this certainly is one of them.

When it comes to stories like this, Imman is the king and he, once again, does a good job. The film is certainly enjoyable by parts and it is just the structure of the story which might not work for many.

Considering we had already seen this plot a plenty of times, we don’t really get to see something new here when it comes to the story. Probably, the initial few scenes written for Jyotika are the major difference. Those scenes are whistle-worthy. However, those scenes create expectations which aren’t completely fulfilled by the latter ones.

On the whole, if you are into family drama and some good acting, this is a film for you. It certainly works by parts and is enjoyable on the whole. It does make a good family entertainer and the release of the film couldn’t be any better.

Don’t look too much into the plot, just watch it for Jyotika who has done an excellent job. 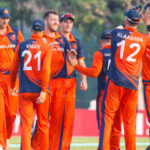 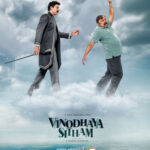