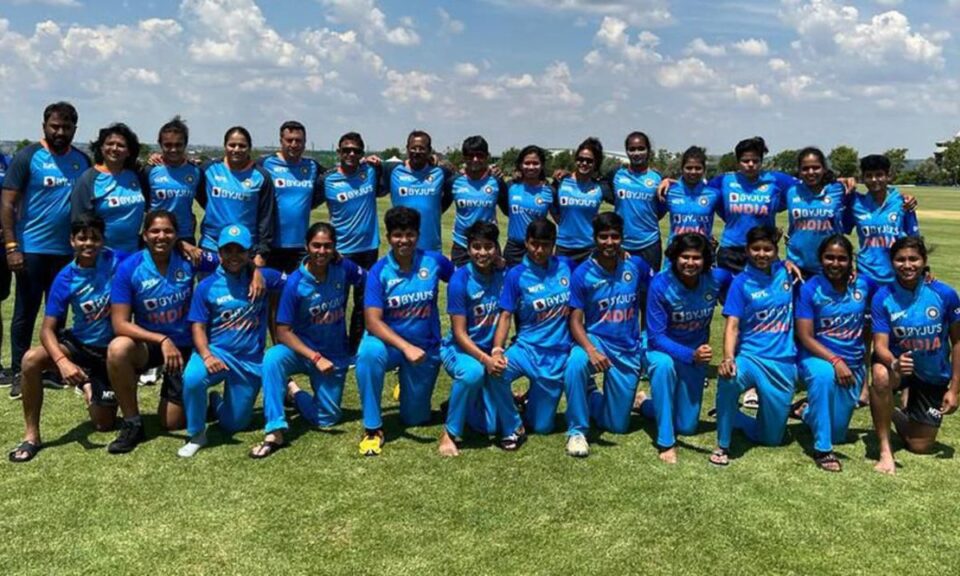 India U19 World Cup team is one of the strongest out here. The team has been preparing for the World Cup for more than six months now.

As we all know, Shafali Verma and Richa Ghosh have played for the Indian senior team.

Shweta was 7 when she first began her practice alongside boys. She used to accompany her sister earlier. The right-handed batter has played for the senior team as well.

A bottom-handed player, strong on the off-side.

Notably, she also scored a century in the NCA camp.

G Trisha is probably one of the well-known names in the U19 World Cup. Coming from the same coaching centre as the legend Mithali Raj (St John’s Cricket Academy), Trisha got into the senior team when she was around 12.

Telangana Districts at 7, then U16, U19, and U23 state teams followed by senior debut.

She is a top-order batter but is super flexible. In fact, in one of the editions of the Challengers Trophy, she batted at 7. She bowls leg spin and is quick in doing so. She has one of the odd actions as well.

Of course, she has one of the crafty batters.

Soumya Tiwari is one of the best cricketing minds I’ve seen. On the field, you will see her in slips, in the inner circle. Always has her player’s back. You will see her run from slips to talk to her bowlers for literally every single delivery. She is animated and wants to lead from the front every single time. An excellent fielder too.

An aggressive batter and an off-spinner. She prefers to bat at number three but could be a good finisher in the future.

A die-hard Virat Kohli fan, she also wants to pick up traits from Harmanpreet Kaur and Smriti Mandhana as well.

She was 11 when she began the game under Suresh Chenani and played alongside boys. Soon, she became the captain of Bhopal’s age group sides.

Soumya Tiwari on the rise – Penbugs

The first thing that comes to my mind when I see Sonia Mendhiya is how calm she is off the field. I literally travelled with the team for (most of) two tournaments and the first time she said hi and smiled was the final day of the New Zealand Development team series.

She is very soft-spoken but is a different player when she takes the field. Coming from the same place as Shafali Verma, Sonia Mendhiya lost her father early and has three siblings. She was sponsored by an NGO when she began the game. (I’m sorry for mentioning “unprivileged” should’ve gone for a better word. I’m sorry.)

She can open the batting, can play in the middle order and is effective with the ball too. Her favourite fielding position is point/backward point.

Sonia ended as the leading run-scorer of the U19 One Day Trophy in the 2021/22 edition. She didn’t bowl much during that series but Shafali Verma surprised everyone when she made her open bowling during the senior T20 Trophy in April 2022.

Rain reduces Mumbai’s game against Jharkhand to 6-over a side. Mumbai needs to beat them big in order to stand an opportunity for the knock-out. They turn to Hurley Gala.

The all-rounder comes in, smashes 5 fours and a six, and scores 22-ball 45*. She opens the bowling and picks up a wicket too.

Gala picked up cricket when she was around 10. She used to accompany her father to the box cricket tournaments in Mumbai. She trains at Ivan Rodrigues (Jemimah Rodrigues’s father)’s Negev Cricket Academy.

While she opened bowling in the U19 T20 Trophy, she was rarely used in T20 Challengers and quadrangular series. Her role was to come in the middle order and get those 20-30. She came back to opening the bowling in the series against the New Zealand Development team.

Hrishita Basu knows how to clear the fence with ease. She is probably the best keeper in the current U19 circuit, even better than the international sensation Richa Ghosh. She loves to keep the scoreboard ticking and is clear when it comes to shot selection. She is also one of the most energetic cricketers you’d see. Not as chirpy as Mehak Pokhar but is one of the loudest.

By this time, almost everyone on the national U19 side knows how well she can sweep the ball. When she walks in, everyone keeps her a leg-side dominant field these days. Basu loves the challenge and takes on them, winning them with ease.

In one of the games in U19 Challengers, India A lost their top order and was around 25/3 at 10 overs. Sonia Mendhiya and Hrishita Basu joined hands. Mithila Vinod was troubling them both. They had a bit of conversation and Basu sees that there was no one behind. Two ramp shots and a reverse sweep got them going. From 25/3, the team ended at 103.

Basu has also improved as a fielder. She usually fields in the mid-wicket region and is good at it.

Basu, who is from Bengal, began her training at LRS Bangla Cricket Academy. Her brother is also a cricketer.

She might not have big numbers to show but her cameos, in the end, have helped teams to win.

Sonam Yadav is your wicket-taking bowler. The left-arm spinner has an excellent arm ball. A recent variation she added to her game. It works well for her at the moment. She was the leading wicket-taker in the recent Challengers Trophy and the quadrangular series.

From gully cricket at 8-9 YO, she joined District Cricket Academy. She got into the UP age group when she was around 12, in 2018.

She comes from a humble background. Her father works in a glass factory and she has a brother as well.

Mannat Kashyap has a special kind of confidence that not many cricketers of her age will have. Leave that Run-out at the non-strikers’ end part, Mannat is more than just that.

Mannat is tall and quick compared to other spinners in the team. She is also a good lower-order batter, something we are yet to see at a higher level but is regular among runs in Punjab district tournaments.

Mannat’s speciality is that she can bowl anywhere in the innings and can fetch us more wickets.

Against the New Zealand development team in one of the matches, Mannat had a crappy start. She opened the bowling. Olivia Gain dispatched a short delivery through mid-wicket for a boundary. She then uses the width offered, cuts this time around. A delicate touch to guide the quicker one from Mannat to the boundary. A disaster first over.

Overs later, Mannat comes back. She takes a deep breath, runs in and stops.

Mannat’s father is a businessperson, her elder brother is in the medical field. The Patiala star practised with boys while growing up. She is a cousin of Punjab’s Nupur Kashyap.

Recently, she changed schools in order to concentrate majorly on cricket.

Archana Devi takes lesser time than anyone between deliveries and is usually very economical. She doesn’t run in but jumps a bit, walks, jumps again and delivers the ball.

By keeping things tight, the off-spinner fetches those wickets. So far, most of her wickets are either stumping or bowled.

Archana comes from a humble background. Her father and then her brother passed away when she was young. Her mother works on farms and is the breadwinner of the family. Her teacher helped her out by making her join an academy and they took care of the expenses.

Parshavi Chopra is yet another leg spinner in the team but Chopra can bat too. She is strong on leg side. She has some nice-looking straight drives and flick shots.

When it comes to bowling, she is quicker than other spinners in the team and has excellent control over her line. Watch out for her variations.

Chopra was 10 when Yuvraj’s Singh’s Academy. She was a medium pacer back then but got inspired by Shane Warne’s videos. Thus, ended up taking up leg spin. Also, she is one of the youngest in the team.

A fun-loving kid. Always ready to take up feedback. Titas Sadhu is currently one of the fastest pacers in the U19 age. She is tall, can swing well and is super handy with the bat.

She got her first player of the match award from Jhulan Goswami.

When I interviewed her in April 2022, she told me that she wants to become a complete all-rounder and not a bowling all-rounder.

5 of them were from Titas Sadhu.

Falak Naz is a ‘Swagger’ and is one of the most confident kids around. She is super optimistic and confident in what she does. That being said, she is always ear and is always ready to pick up a variation. She is a quick thinker too.

She is a pacer who consistently hit that fourth-stump line. Most importantly, she can get you those important runs in the end.

These days, she concentrates more on her bowling but would love to see her bat.

Falak Naz comes from a humble background. Her father works as security in a school. Her brother left his studies to take up a job to support the family. They live in a tin-roofed house.

Shabnam, along with Titas Sadhu and Yashashree, is super fast. She opens the bowling for the team and literally runs in from the boundary. Mind you, she is just 15.

Something, most people couldn’t believe. The players of the New Zealand Development team thought she was at least 18 because of how tall she is and how difficult she was to face. They were stunned and kept asking her age.

Shabnam was around 8 when she used to accompany her father to the ground. His father, who is in the Navy, was a pacer too. For the past three years, she is super dedicated to the game, so much so that she practices both in the morning and in the evening. She wants to become like Jhulan Goswami but is a big fan of Shabnam Ismail.

Shabnam’s height makes her more threatening. Watch out for her speed. She is only going to get better there. Few more years, who knows, she can turn into the fastest ever. At least from the country.

Yashasri made it to the team after Hurley Gala got injured. Yashasri is the fastest in this U19 team, followed by Titas Sadhu and Shabnam.

The Hyderabad pacer was the captain of the state U19 team and has been a part of the senior level for a while now.

April 2022. Senior T20 Trophy. Yashasri picked up a battle with one of the Rajasthan batters.

Sumitra Jat was in an attacking mood that day. She took on Yashasri. There were ramp shots involved. This is didn’t go well with Yashasri and she replied with a fast bouncer. The ball went on to hit Jat in the helmet. It was so bad that I was able to hear the sound from a good distance. She asked sorry and Jat had a concussion test done in the middle. Thankfully, she was alright.

Watch out for her speed. 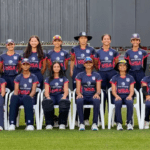 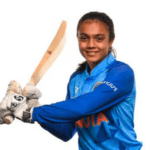