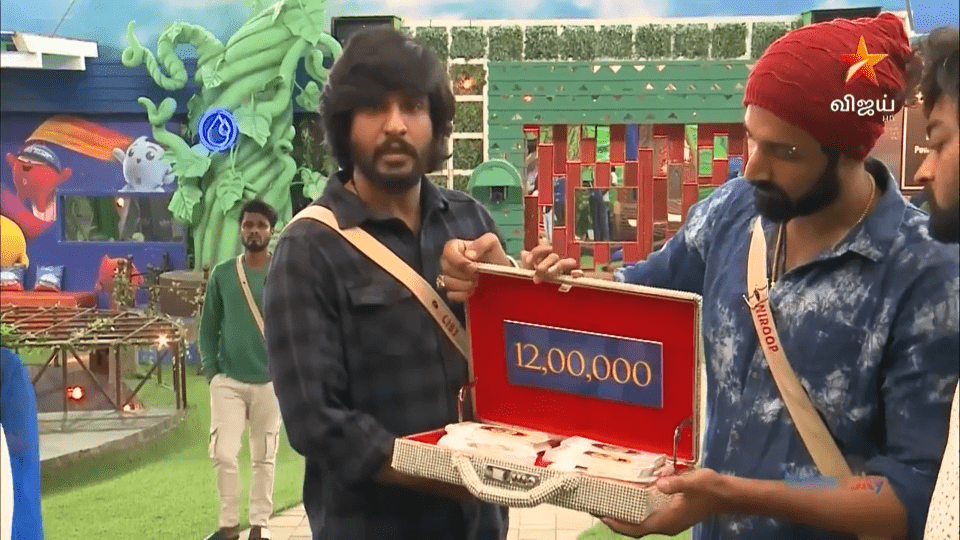 Bigg Boss 5 Tamil Day 95 begins with everyone discussing the amount.

Priyanka searches for her coffee. She scolds everyone, thinking that someone has stolen that. Later, she finds it in the same place.

Ameer and Pavni talk about the amount and how it keeps increasing.

We then see Pavni and Ameer wear the same color outfit. Pavni feels like Ameer has done to tease her and wants him to change. Niroop says that why should he and mentions that he himself is wearing the same color pant.

Ameer then calls everyone, says that he is ready to leave the house with the cash. He gives reasons and everyone believes him. Turns out it is a prank. Everyone beats him in anger.

Later, we see a sacrifice task. Everyone must donate one of their favourite pairs of outfits.

After a few minutes, the amount goes up. Niroop asks if Thamarai wants to leave because it is a huge amount and she needs it more compared to others.

This time, Ciby wants to take it. Everyone thinks that he is making fun.

Ciby says that he is losing his identity and is not himself here anymore. He promised himself that he would leave the house if he find that he is changing here. Contestants, first, doesn’t believe him and then they try to change his decision but they couldn’t. He also feels that he is losing confidence. Therefore, he wants to leave.

He picks up Rs 12 Lakhs and leaves the house. Bigg Boss wishes him the best.

Ameer asks Pavni if she had thought that he would leave. She says yes and she adds that she would’ve left if they had increased the amount. Ameer asks why she is not confident that she would win. She says that she didn’t come to win at all.

Everyone talks about Ciby and how they feel bad for him when he had said that his confidence got broken. They are all surprised as well as guilty for nominating him. They didn’t know that he was thinking about all these inside the house.

Everyone is seen eating fish and since Priyanka doesn’t eat it, she wants to know what’s her food. Everyone wants her to cook for herself and she begins to rant about the situation.

Pavni couldn’t believe that there is no task for the day. Priyanka says that Ciby had left the house and that is one of the reasons why.